an overland expedition from Brussels to Bombay

A 15000 km overland expedition from Brussels to Bombay

Discover the story of a 15.000km overland expedition from Brussels to Bombay in 1953.

After WW2 Societé Nouvelle Minerva struggled to re-start the assembly of motor vehicles from it’s bombed out factory in Mortsel, close to Antwerp in Belgium. The company was founded by automobile entrepreneur Mathieu Van Roggen in 1935, after purchasing the remains of the famous luxury car maker Minerva, that filed for bankruptcy a couple of years earlier.
Van Roggen was no stranger to automobile assembly. At 19 years old he inherited the stone quarry in Sprimont from his father who died early. He was more interested in engineering and in 1922 became managing director of Automobiles Imperia in Liège, by merging several smaller automobile companies in the southern part of Belgium. Not only did he manage to put Imperia on the world map as a desirable car, but he also participated in several rally’s to emphasize the strength of the Imperia cars. Together with his chief engineer Arnold Couchard they introduced slide-valve engines to several of their cars.

Only in 1947 Van Roggen regained access to his bombed out factory in Mortsel, which was particularly hard hit after the bombardment of the city of Mortsel, that caused 900 casualties. In 1951 the Belgian Defense Forces, who were looking for a large number of light 4×4 vehicles, approached him. A series of trials were organized between Land Rover and Willy’s Overland and Van Roggen managed to secure a first contract for the assembly of 2500 Land Rover Series 1, with a substantial amount of local content, to drive local manufacturing.

Since shortages of steel limited the production at Rover, Belgium supplied most of the steel needed for the manufacturing of the vehicles. By 1953 the Societé Nouvelle Minerva had established a very modern assembly plant and was producing an average of 25 vehicles per day to complete the order of around 9000 4×4’s. 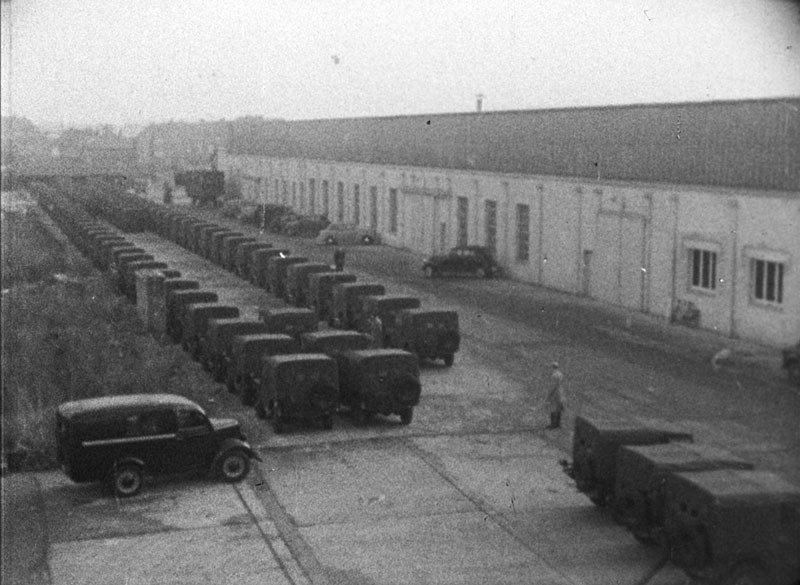 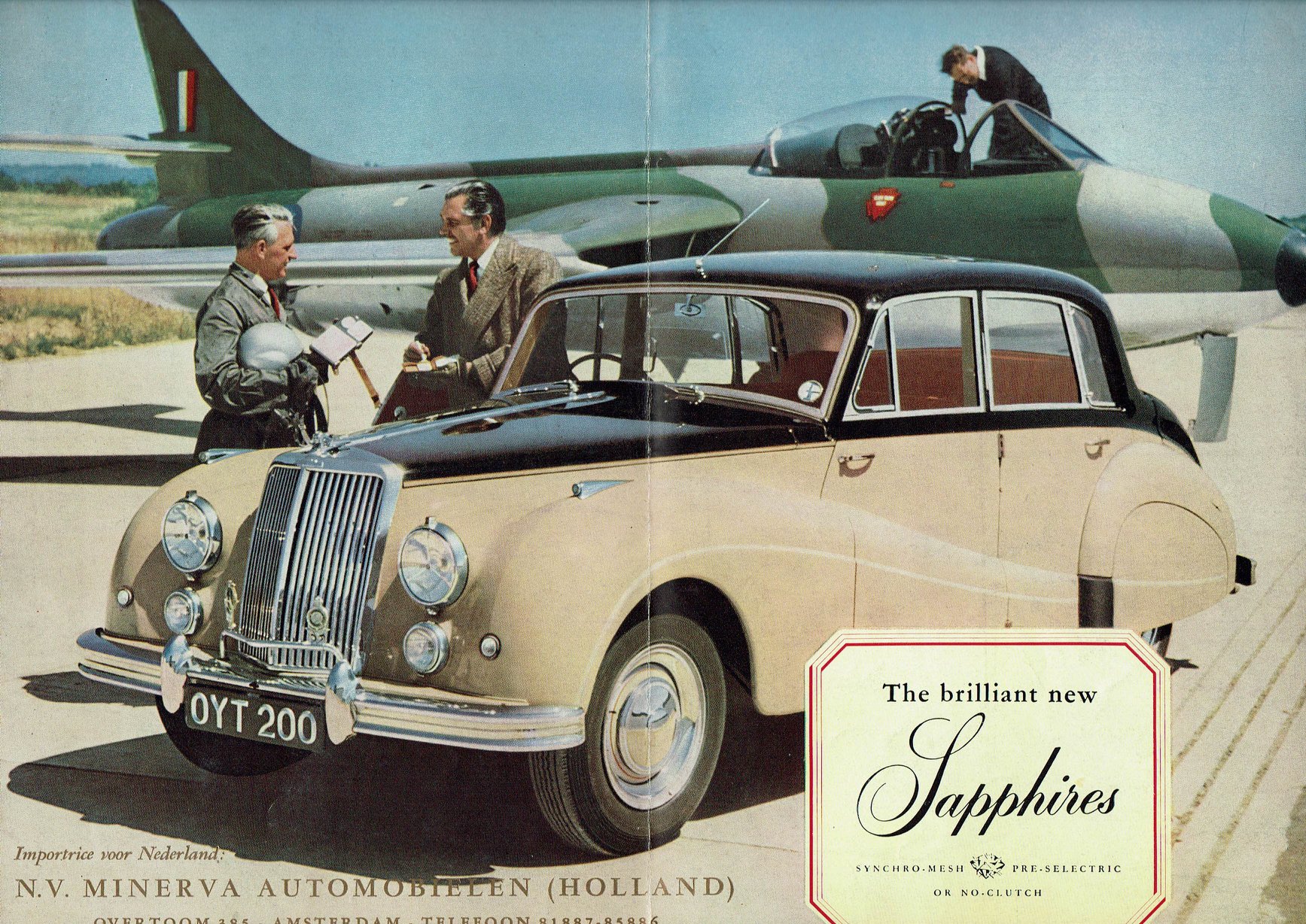 Since the order by the Belgian Defense Forces was coming to an end, Van Roggen focused his energy on the civil- and export-market and started assembling a local version of the 86” Series 1, still under license of Land Rover.

His ambition was to revive the Belgian automobile manufacturing from before the war and he planned a luxury touring car as well. Since funding was an issue they decided on the local assembly of the Armstrong Siddeley Sapphire 346 saloon car, powered by a 3.4L six-cylinder engine and with a luxurious interior, rivaling the Jaguar MK IV. Soon CKD kits arrived in Morsel and the assembly started and Van Roggen started planning a way to promote his vehicles in the press.

He was approached by Raymond Boschmans, vice-president of the Royal Automobile Club of Belgium, no stranger to overland adventure himself and with a wide network of diplomatic connections. Boschmans had explored Africa by car in the 1930’s during various trips and was well placed to organize this adventure as well and started assembling his team for the 15.000km trip to India. 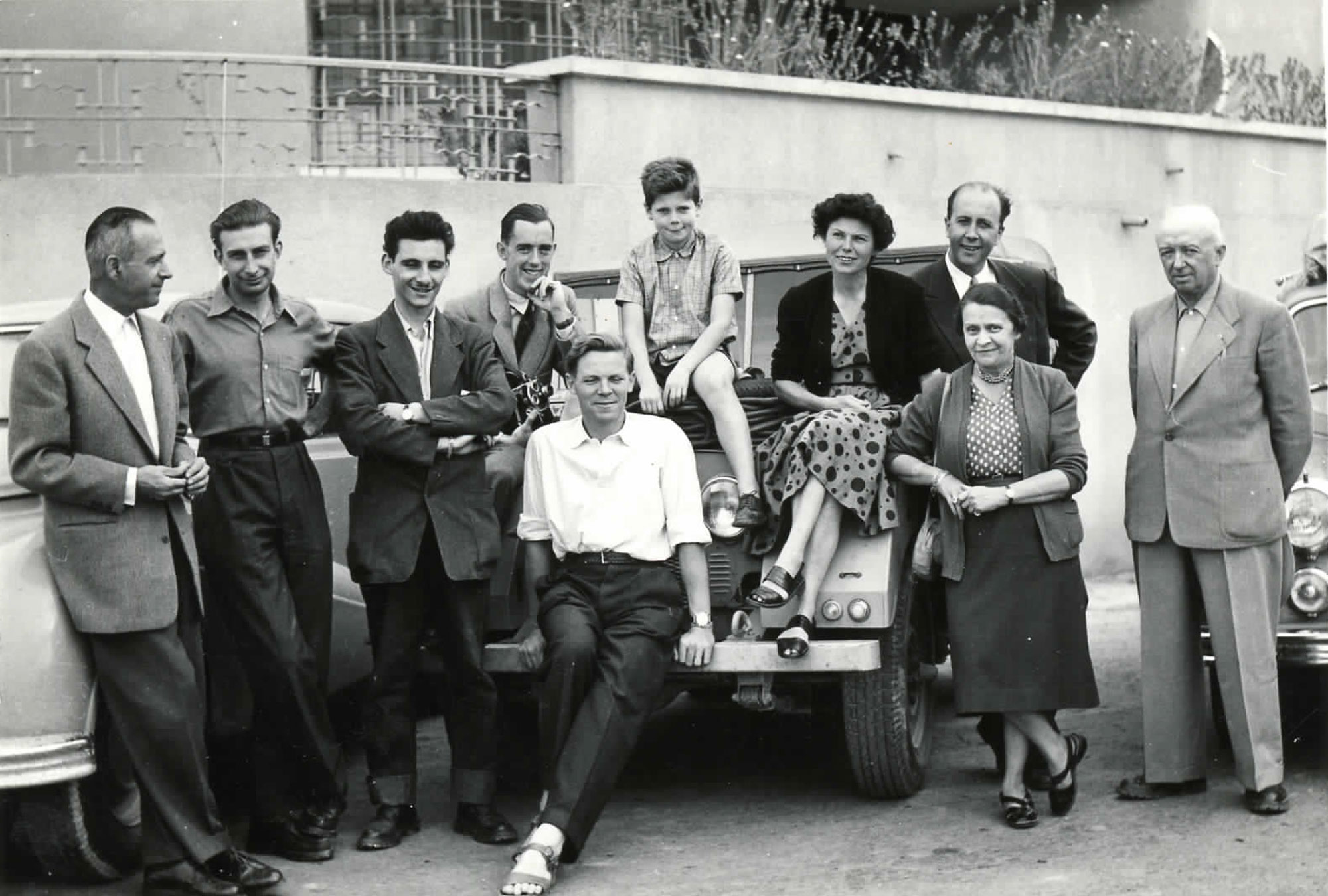 The well-known journalist and avid racing driver Paul Frère was approached to drive on of the Armstrongs, write a series of articles for various magazines about the trip and summarize the whole adventure in a book.

A team of cinematographers was assembled under the leadership of the enthusiastic Pierre Levie, who was starting his career as a documentary filmmaker and director at that time. His wife Suzette and their son Jean-Pierre, Philippe Colette and Gérard Perrin as cameramen and 2 assistants Guy De Pierpont and Jean-Pierre Douret, would accompany him.  Pierre Levie agreed to take the role as director of the expedition if he would be able to use the trip to document also the cultural highlights on the road and make a series of documentaries about the cultural heritage of the countries they would cross.

Mathieu Van Roggen agreed to supply the Land Rovers for the trip and make the necessary modifications. An order was placed by Van Roggen at Land Rover for a 107 long-wheelbase pickup to accommodate all the equipment needed for the film crew. 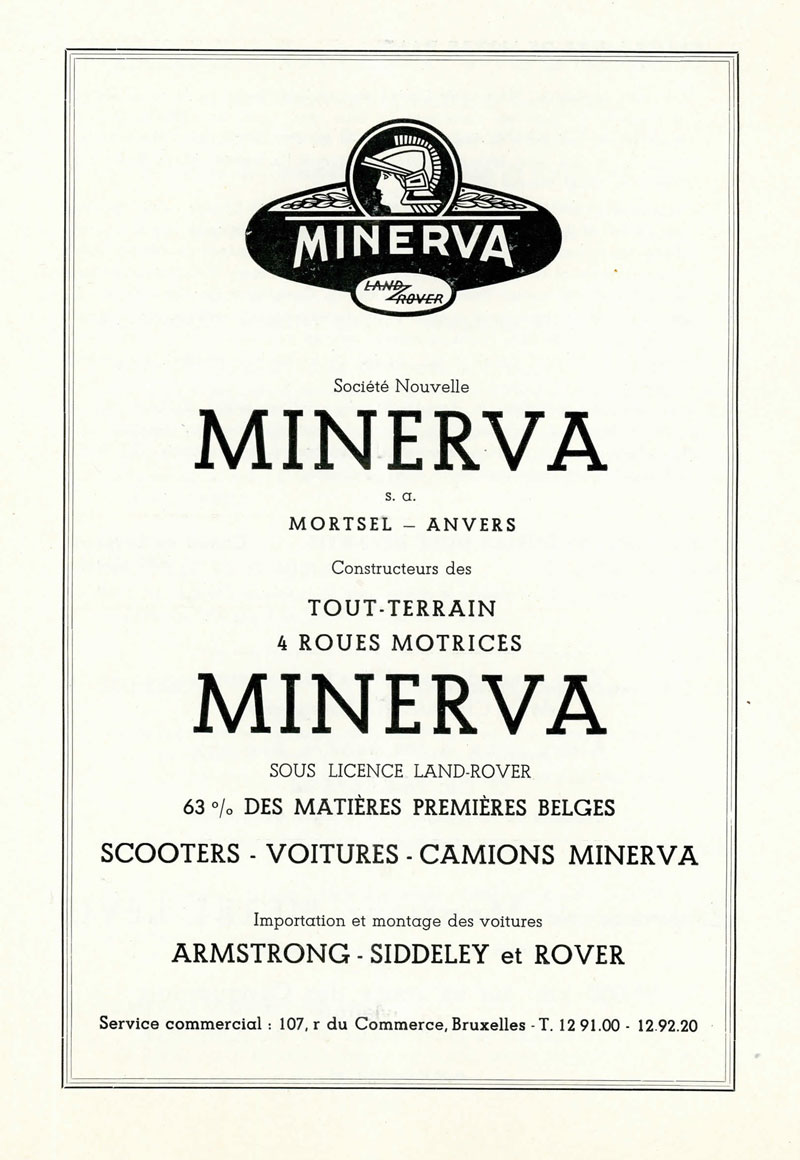 Modifications were made when it arrived in Mortsel. A second fuel tank was added and an electrical generator, driven from the PTO, was installed between the front seats to power all the lights needed for filming. A hard top for the 107 was fabricated in Mortsel, apparently by joining 2 80” hardtops together. More steel racks were installed in the rear of the 107 to arrange the film equipment and the Landrover wings were replaced with the distinctive steel sloping Minerva ones, making it look like a car from the Mortsel factory.

As for the second 80” Minerva, no information has been found yet. It is definitely an 80” S1 vehicle, possibly one of the first batch of vehicles built for the Gendarmerie (police force) since it has several of those characteristics. Landrover chassis with PTO hole, galvanized front window and Landover fuel tank. It was mainly used to carry the cabling for the film crew and was also fully charged with luggage.

Both Armstrong Siddeley Sapphires were standard factory specs and only 1 had a roof rack fitted, no further modifications were made. To provide some extra distraction on the road they were both fitted with Philips car radios, which miraculously survived the arduous journey very well.

Thanks to the widespread network of connections of Mr. Boschmans the crew were all issued diplomatic passports in order to facilitate the border crossings and overland travel trough all the countries en route to India. The journey would take them trough Yugoslavia, Turkey, Syria, Iraq, Iran, Pakistan and India.

The expedition was documented on 16mm film and photo by Pierre Levie and his crew. He was already experienced as a director on these kinds of adventures, having worked already an several films in the Belgian Congo in 1951. The images shot during this trip would be compiled into several films highlighting the ancient civilisations in Syria and Iraq, the crusader castles and many others.
Below an excerpt from the documentary about his life “Pierre Levie, un producteur très animé” by his daughter Françoise Levie.

Journalist and racing driver Paul Frère took it upon him to write a series of articles for the Belgian newspapers and automotive magazines, describing their journey on a weekly base.

The stories were published among others in the Royal Auto Revue magazine from the Royal Automobile Club, Le Sports Moteur and Het Laatste Nieuws.

After his return to Belgium a book was published by Paul Frère with his personal notes and photographs in a limited edition only. Today this book is a collectors item and only rarely one can be found.

In the following years Paul Frère became one of the leading motor journalists in Belgium & beyond and he combined this with a career as an racing driver and test pilot. Among other races, he was second in the Belgian Grand Prix in 1956 and won the 1960 Le Mans 24 Hours race, driving for Ferrari. He was hired as an engineering consultant for Maserati and various Japanese manufacturers.

You explore the original publication here. 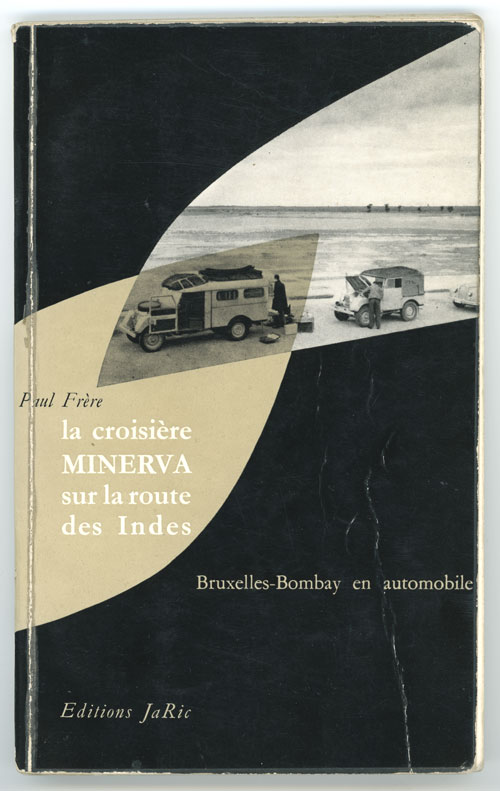 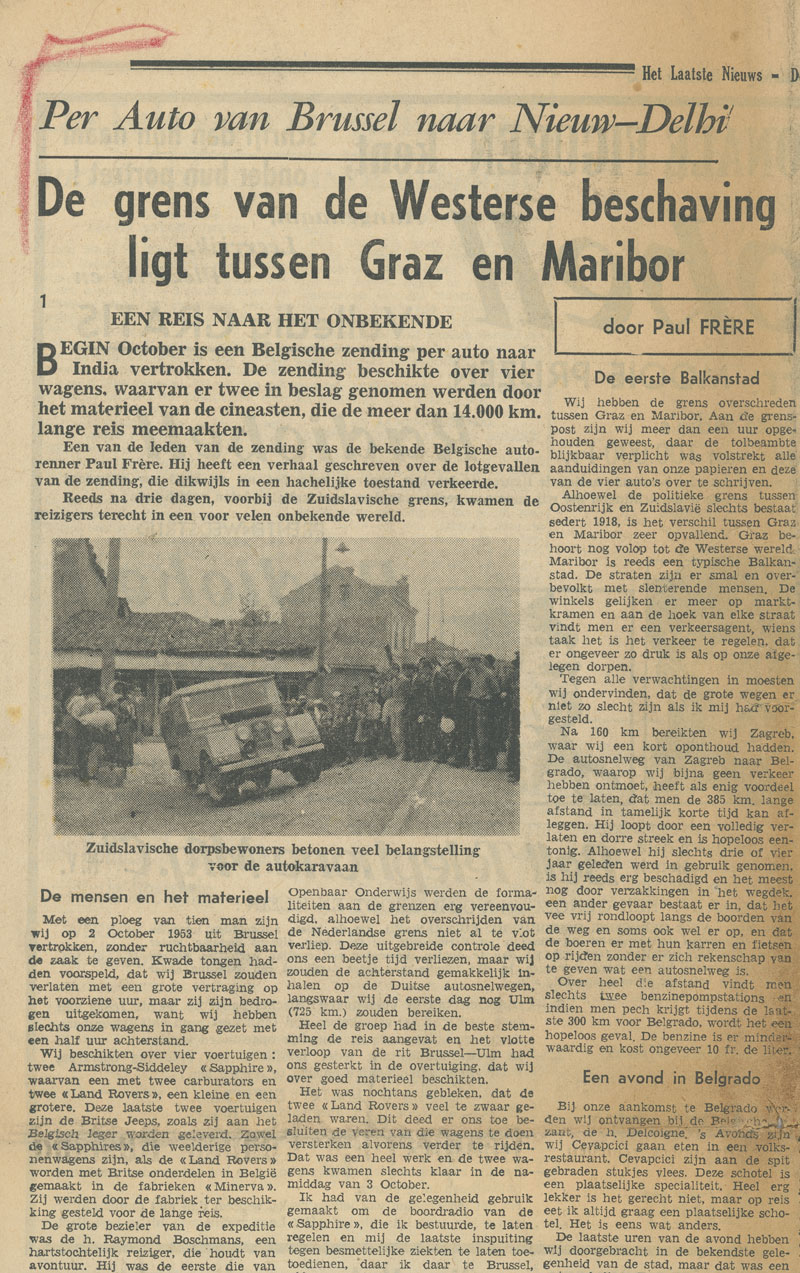